Blighter’s new national border security white paper has just been published.  The document is available as a downloadable PDF or can be read as an article under the Key Markets section of our website here. 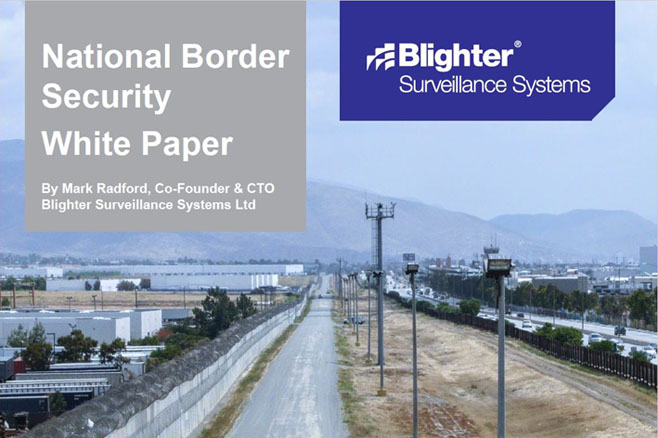 Many of the world’s nations have concerns about national border security and in particular, people entering their country either to live and work there, or smuggle in illegal goods. At official border crossings, substantial fences and formal security controls provide adequate protection, however in remote areas, the cost of providing and maintaining effective physical barriers is excessive.

A nation’s borders are one of its primary defences against a range of threats, but they also have a number of vulnerabilities that can be exploited for criminal gain, illegal migration or terrorist activity.

The integrity of the physical border remains critical, particularly in areas with long land or sea borders. These vulnerable frontiers can be enhanced by using technological innovations such as infrared sensors, heat-sensing cameras, unmanned aerial vehicles, and radar and satellite surveillance. Countries are also co-operating along shared borders to increase the breadth of coverage.

Advancements in e-scanning radar capabilities mean that they are being used as the primary detection sensor for long-range remote surveillance systems where the ability to detect slow moving targets, even in complex mountainous terrain, makes them the ideal solution for the remote surveillance and detection of vehicles, people and even crawlers trying to cross borders illegally.

Mark has worked in the radar industry since 1985, initially as a designer of high-performance signal processing solutions for naval radar systems and later as a system designer and development manager.  Since moving to Cambridge, UK, in 2000, Mark has been involved in various radar development projects including the specification, design and development of the Blighter radar family, unique electronic-scanning FMCW Doppler surveillance radars.

Since his appointment as CEO of Blighter Surveillance Systems in 2013, Mark has overseen developments of the Blighter technology to enhance it for use in more complex environments such as the heavily cluttered operational areas of airports where buildings and airport traffic limit the effectiveness of traditional perimeter security radars.  Further enhancements now see Blighter radars being used for coastal security and for air security, where Blighter’s ability to detect very small and slow-moving targets in heavily cluttered environments is a key technological advantage.  Mark first developed the AUDS (Anti-UAV Defence System) counter-drone system in 2014, which is now the principal Short-Range Air Defence (SHORAD) system used by US DoD in their warfighting efforts and is in operational use at leading UK Airports.

Mark headed the spin-out of Blighter Surveillance Systems Ltd. from its parent company in 2015 to enable rapid business growth and in March 2019 resumed his technology leadership position for Blighter by appointment to ‘Co-Founder and CTO’.