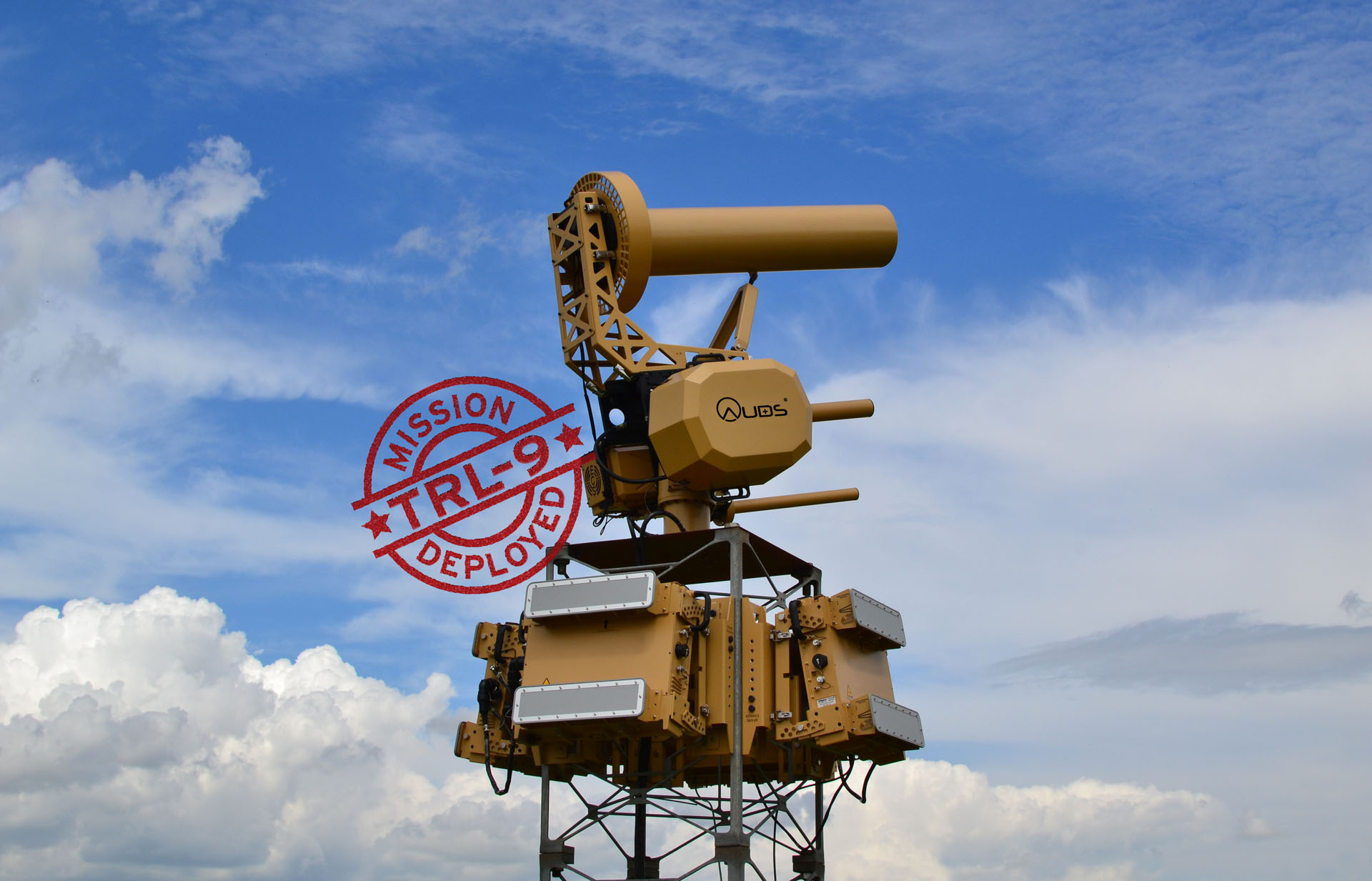 Mark Radford, speaking for the AUDS team, said: “Achieving TRL-9 status is an important milestone for AUDS in the embryonic counter-drone market. The sale and deployment of multiple AUDS systems to the U.S. military to protect critical assets and personnel makes AUDS, we believe, the only TRL-9 rated fully integrated strategic counter-UAS system on the market.”

Over the last 18 months, the AUDS system has been heavily evaluated and tested by military and government organisations. Through this process, AUDS consistently exceeded the mission requirements, simultaneously providing ground and air surveillance against possible threats.

This detect, track, defeat process is very quick and typically takes 8-15 secs. Using AUDS, the operator can effectively take control of a drone and force a safe landing. The AUDS system works in all weather, day or night and the disruption is flexible, proportional and operator controlled.

AUDS is positioned at the strategic end of the UAS countermeasures market for use by government agencies, the police and military to protect high value critical national infrastructure or strategically important sites/events. These include nuclear power stations, borders, political, sporting or VIP events, airports and airbases.

AUDS is also currently being evaluated by the U.S. Federal Aviation Administration (FAA) for use at major U.S. airports as part of its Pathfinder Programme. The FAA has signed a Co-operative Research and Development Agreement (CRDA) with Liteye Systems, the AUDS team’s manufacturing and integration partner in North America, to test AUDS at US airports selected by the FAA. (See FAA release – https://www.faa.gov/news/updates/?newsId=85532).

To further consolidate its market leading position, the AUDS team has developed a range of new platforms – fixed, semi-permanent and temporary – to better meet the needs of customers in different markets. These include a platform for the deployment of AUDS to the roof of a building; a field mast system for the protection of semi-permanent sites such as forward operating bases (FOB), air bases or army camps; and a system for rapid deployment purposes.

AUDS will be showcasing its counter-UAS solutions at The International Defence Exhibition and Conference (IDEX 2017), at the Abu Dhabi National Exhibition Centre (ADNEC), Abu Dhabi, UAE, from 19 to 23 February 2017. AUDS will be represented at IDEX by its local UAE partner Trust International in Hall 11/Stand C05.

Chess Dynamics is a developer of sophisticated optical surveillance, communications and stabilised radar platforms and systems for land, maritime and airborne applications. The company’s extensive product based systems are ideally suited for tasks such as: search and rescue operations, protection of naval vessels, critical national infrastructure, military bases and vehicles. Chess’ engineering excellence and know-how combine all forms of electro-mechanical servo mechanisms and long range cameras, with state-of-the-art digital video tracking technology, offering leading capability to modern military and homeland defence organisations. Chess Dynamics’ products and EO systems are manufactured on site to BS ES ISO 9001, Mil-Std-461 and 810C. Chess Dynamics is based in Horsham, West Sussex in the UK.

For over 25 years Enterprise Control Systems Ltd (ECS) has been supplying mission critical RF inhibition systems and surveillance data links in support of security services around the world. ECS is a proven and trusted British supplier to the UK MoD, the UK Police and to specialist military and government users in over 40 other countries. ECS designs and produces a range of programmable jammers (RF Inhibitors) to counter a variety of threats. ECS understands the complex integration necessary between equipment performance, training, tactics, techniques and threat assessment needed to achieve optimum user capability in demanding and dynamic situations. ECS also designs and produces specialist COFDM data links optimised for use in high level military and security domains. ECS data links are fully secured (encrypted), optimised for long range performance and are designed to be robust in complex RF environments. ECS brings together their expertise in data link technology and RF Inhibition to provide a highly effective RF Disruptor for AUDS. ECS is based in Wappenham, Northamptonshire in the UK.f