London, UK, 8 September, 2015 – The world’s first fully integrated detect-track-disrupt Anti-UAV Defence System (AUDS) – launched by a trio of British companies in May this year – now features a quad band radio frequency (RF) inhibitor/jammer, an optical disruptor and rapid deployment features in the final production version of the market leading counter-drone system. These enhancements follow extensive customer trials of the pre-production system across Europe and North America over the spring and summer. 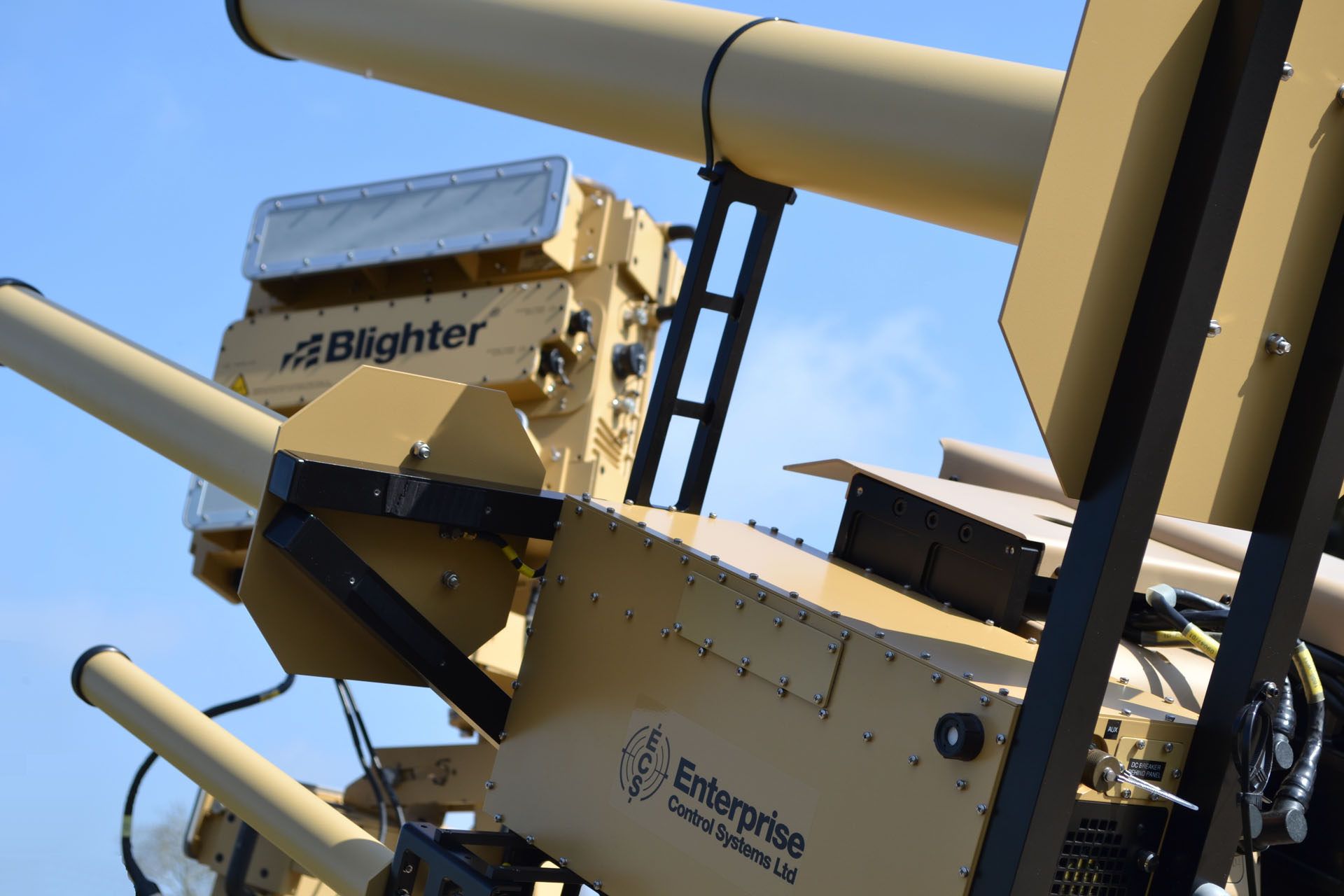 The AUDS system, developed by Blighter Surveillance Systems, Chess Dynamics and Enterprise Control Systems, is designed to combat the growing threat of malicious micro, mini and larger unmanned aerial vehicles (UAV) or drones. The system can detect a drone five miles (8 km) away using electronic scanning radar, track it using infrared and daylight cameras and specialist software before disrupting the flight using an inhibitor to block the radio signals that control it.

Graham Beall, managing director, Chess Dynamics, said: “Countering drones is now a global issue and an increasing concern for the military, government and homeland security forces across every continent. It’s expected that unmanned aircraft systems (UAS) will be used increasingly for malicious purposes as they can carry cameras, weapons, toxic chemicals and explosives and are being used increasingly for terrorism, espionage and smuggling purposes.

“Our system has been developed to address this urgent operational requirement and has been successful in government sponsored counter-UAV trials, detecting and disrupting a variety of fixed and rotary wing drones in under 15 seconds. The new capabilities further enhances the system’s suitability for countering rogue or malicious unmanned aircraft systems (C-UAS).”

According to the AUDS team, the speed with which new features have been added to the system since the launch in May, demonstrates both the agility and flexibility of the trio of specialist companies. The quad band inhibitor enables the AUDS operator to disrupt the different licensed telemetry bands of commercial drones no matter where in the world they are designed and licensed for use. For example, both the 433 and 915 MHz frequencies commonly used by unmanned aircraft systems (UAS) can be disrupted as can the 2.4 GHz control band and the global satellite (GNSS) bands.

The new optical disruptor is yet another tool available to the AUDS operator. This feature can be utilised for both pointing at a drone for identification purposes and disrupting the automatic gain control settings in the drone’s camera system such that the operator loses visibility. The optical disruptor can also provide a very precise identification of known UAV launch activity to any ground forces.

Commenting on the new features, Colin Bullock, CEO, Enterprise Control Systems, said: “Carefully controlled disruption of these command links – and the use of the optical disruptor – significantly impairs the operator’s ability to control the drone and forms a key part of the spectrum of techniques used by the AUDS system to mitigate the malicious use of drones.”

Other improvements in the production version of the AUDS system include a new positioner for the camera. And, following a whole series of trials in a variety of different terrains, the team has modularised the system to reduce the single lift weight down to 25 kg. All the different elements – radar, cameras, and RF inhibitor – now clip together to form a complete system.

Mark Radford, CEO, Blighter Surveillance Systems, added: “We have so far carried out over 150 hours of live testing in government organised trials operating against more than 200 flown sorties of group 1 UAVs. Feedback from our own team and from customers was for a greater level of modularity to speed deployment and to minimise the need for multi person set-up teams. This has now been implemented in the production version – yet another example of our team’s fleet footedness.”

The Anti-UAV Defence System (AUDS) integrates the Blighter A400 Series Ku band electronic scanning air security radar, Chess Dynamics’ stabilised electro-optic director, infrared and daylight cameras and target tracking software, and a directional radio frequency (RF) inhibitor from Enterprise Control Systems to detect, track, classify, disrupt and neutralise UAVs at ranges of up to 8km. The AUDS system is even effective against so-called Group 1 micro UAVs at ranges of up to 2km and Group 1 mini UAVs at ranges of several kms.

The AUDS system is designed for countering drones or remotely piloted aircraft systems (RPAS) in remote border sites or urban areas. It can be operated from fixed locations and from mobile platforms. It has been developed and manufactured in the UK using British technology and a production version is available now.