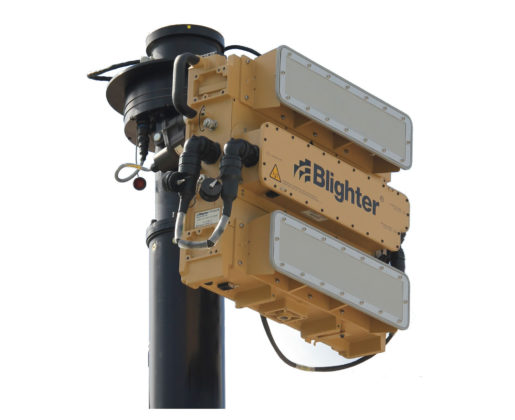 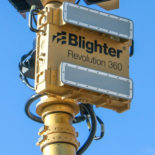 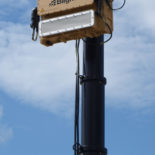 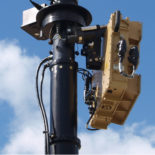 Blighter Revolution 360 is designed to address the growing requirement for low-cost and lightweight mobile radar surveillance. It uses a unique azimuth positioner unit, based on a maintenance-free cable-drive technology. Read More

Blighter Revolution 360 is based on Blighter Surveillance Systems’ (BSS) B402 radar system, fitted with W20S wide elevation beam antennas. This configuration offers maximum performance in the most compact size, with the 20° wide elevation beam being ideal for mobile deployment in hilly and mountainous areas.

The radar can detect a single walking person at distances of up to 7.4 km, over 360° (in four 90° quadrants). However, in typical deployments faster scanning modes may be used to reduce the target revisit time to a minimum. Operating in Vortex fastscan mode, Blighter Revolution 360 can achieve a full 360° ‘scan & pan’ surveillance in just 20 seconds. Blighter’s coactive FMCW Doppler fast-scan processing detects small and slow moving targets in a single 90° electronic-sweep, meaning that it can then immediately move onto the next 90° quadrant.

Blighter Revolution 360 maintains its ultra high reliability by use of a unique positioner that is remarkably simple and reliable. The ‘cable-drive’ mechanism in the positioner is unaffected by temperature, dust, sand, ice or snow. Any accumulation of dirt or ice, if left static for a time, is simply knocked off when the positioner next moves. The cable-drive positioner uses a compact yet high performance servo motor allowing the positioner and radar to be optimally accelerated and decelerated between surveillance quadrants. The positioner has four precisely defined set positions, each at 90° to one another so that the radar is precisely pointed in each one of its 90° ‘scan & pan’ surveillance quadrants. For surveillance over a narrow sector of less than 90°, the positioner is made to stare at any azimuth angle so that the radar’s PESA e-scan beam is centred about the area of interest.

Blighter Revolution 360 actually rotates around its mast, allowing it to sit beneath an integrated electrooptic (EO) camera system without obstructing its view. Other long-range mast-mounted radars have to sit on top of the mast, thus creating a conflict with the EO system.

As standard, the radar is supplied with antennas that provide a 20° wide elevation beamwidth, which is ideal for most surveillance applications. A simple, low-cost manual elevation control is included that allows a further ±10° of physical tilt for situations where the surveillance vehicle is high on a mountain top or deep in a valley. The azimuth positioner is controlled directly by a serial
port on the radar. This means that the entire Blighter Revolution 360 appears as a single integrated sensor with the new scan modes and 360° capability programmed into the radar unit. This makes it simple for both existing and new customers to integrate the Blighter Revolution 360 into their own command and control (C2) systems. BlighterView HMI 2, BSS’s own C2 software platform, provides the additional controls for the new Blighter Revolution 360 scanning modes: ‘scan & pan’ and ‘stare’. BlighterView HMI 2 is designed to integrate with a wide range of 3rd party EO camera systems.