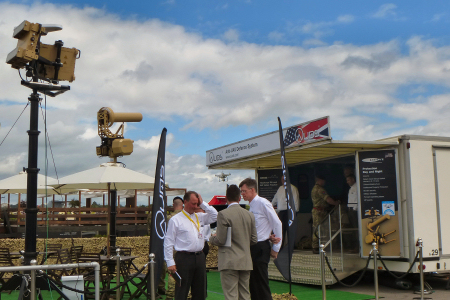 This biennial showcase for the world of aviation takes place on 11-17 July in Farnborough, Hampshire, UK, and attracts both the defence and commercial sectors including military delegations from over 45 countries, 22 international pavilions and more than 1500 exhibitors.

Mark Radford, speaking for the AUDS team, said, “The threat from small, commercially available UAVs is high and AUDS has been specifically designed, fully tested and is production ready to deal with the problem. Not only can it detect, track, disrupt, and defeat drones, it can also provide vital evidence for subsequent criminal charges. Farnborough, with its wide range of international military, security and commercial visitors provides the team with an excellent opportunity to demonstrate its capability.”

The AUDS system is designed for countering drones or unmanned aircraft systems (UAS) in remote border areas, at key infrastructure sites such as airports, air fields, nuclear power stations, oil refineries or for protecting political, sporting or VIP events in urban areas. It can be operated from fixed locations and from mobile platforms.

The AUDS system is the world’s first fully integrated detect-track-disrupt-defeat counter-UAV system that can detect an unmanned aerial vehicle (UAV) or drone six miles (10km) away using electronic scanning radar, track it using precision infrared and daylight cameras and specialist video tracking software before disrupting the flight using an inhibitor to block the radio signals that control it.

This detect, track, disrupt, defeat process is very quick and typically takes 8-15 secs. Using AUDS, the operator can effectively take control of a drone and force a safe landing or send it back home. The AUDS team has now carried out over 400 hours of ‘live’ testing in government related trials against more than 400 flown sorties of group 1 UAVs.

Interest in the AUDS system from the defence and commercial sectors has been significant since the production-ready system was launched in September 2015. In May 2016, the AUDS system was selected – through Liteye Systems – by the United States Federal Aviation Administration (FAA) for evaluation at US airports as part of its Pathfinder Programme. This FAA research programme is designed to evaluate technologies that can be used to detect and identify unauthorised unmanned aerial vehicles (UAVs) or drone flights near airports. (See FAA release – https://www.faa.gov/news/updates/?newsId=85532)

Come and meet the AUDS team on stand OE17 at the Farnborough International Airshow, Farnborough, Hampshire, UK, from 11-17 July 2016.

For the rest of the world contact any of the following:

A promotional video of the AUDS system can be seen here:

Chess Dynamics is a developer of sophisticated optical surveillance, communications and stabilised radar platforms and systems for land, maritime and airborne applications. The company’s extensive product based systems are ideally suited for tasks such as: search and rescue operations, protection of naval vessels, critical national infrastructure, military bases and vehicles. Chess’ engineering excellence and know-how combine all forms of electro-mechanical servo mechanisms and long range cameras, with state-of-the-art digital video tracking technology, offering leading capability to modern military and homeland defence organisations. Chess Dynamics’ products and EO systems are manufactured on site to BS ES ISO 9001, Mil-Std-461 and 810C. Chess Dynamics is based in Horsham, West Sussex in the UK.