Cambridge, UK, November 2, 2021 – Blighter Surveillance Systems (‘Blighter’, www.blighter.com), the British designer and manufacturer of electronic-scanning radars and surveillance solutions will be showcasing the recently launched A800 3D Multi-Mode Drone Detection Radar on Stand 12a at the Three Counties Defence & Security Expo (3CDSE) in Malvern, Worcestershire, from 3 to 4 November 2021.

Taking place at the Three Counties Showground in Malvern, the theme of 3CDSE 2021 is Innovation, covering cyber security, hardware and vehicles with an emphasis on UAS and counter-UAS.  The Three Counties of Herefordshire, Worcestershire and Gloucestershire are a major hub of the UK’s defence and security industry, and registration for the event is available here. 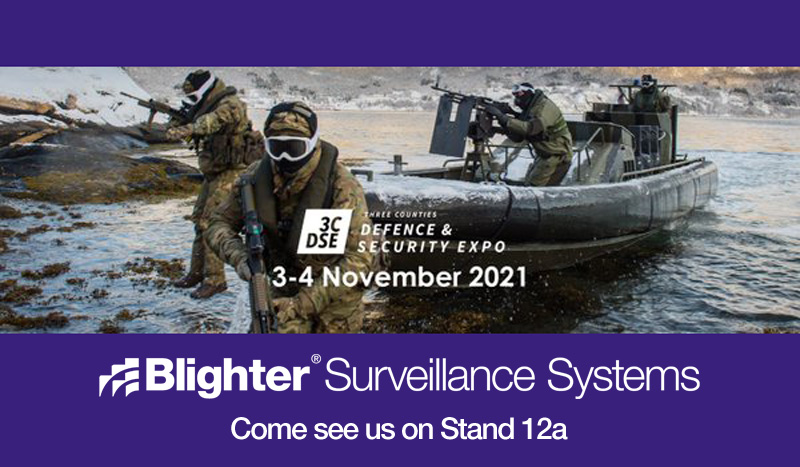 Blighter’s A800 radar (www.blighter.com/a800) offers an innovative ground-based solution to threat detection, utilising multi-mode surveillance capability usually reserved only for large-scale radar systems and packaging it into a smaller, more flexible radar with a maximum range of 20 km.  The A800 3D multi-mode radar is well-suited to border and perimeter surveillance, capable of being mounted to fixed towers and masts, as well as to land vehicles and mobile surveillance trailers.

“Having already exhibited this year at DSEI in London and the World Border Security Congress in Athens, we are excited to be attending yet another live event,” said James Long, Chief Operating Officer, Blighter Surveillance Systems.  “As an agile British SME, 3CDSE 2021 provides a superb opportunity to engage with local innovators and suppliers, and to showcase the A800’s counter-UAS capabilities.”

Blighter radars are key sensors in border and perimeter surveillance and counter-drone applications, and are used in more than 35 countries around the world, delivering 24/7 security protection along national borders and coastlines, at military bases and for critical national infrastructure.

Current programmes include multiple territories with the US Department of Defense, in South Korea monitoring the demilitarised zone (DMZ), and in various European airports including London Stansted and London Gatwick providing wide area perimeter surveillance and detection of drone activity.  Most recently, Blighter was selected to provide advanced integrated B400 series target acquisition radars for a fleet of Armoured Fighting Vehicles.